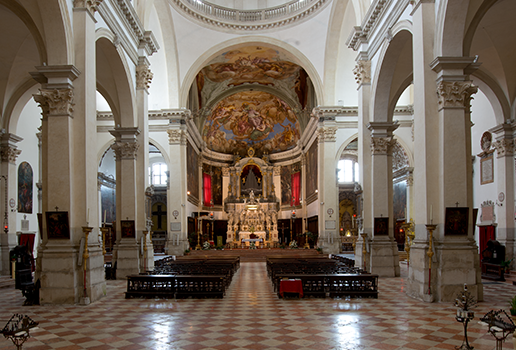 The first church of San Pietro Apostolo was erected in the 8th century as the episcopal seat of the diocese of Castello and then of the patriarch of Venice from 1451 to 1807, when the role of cathedral was assigned to the church of San Marco. Rebuilt in Romanesque form in the 12th century, it was renovated during the 15th and 16th centuries with the construction of the bell tower (Mauro Codussi, 1482-1490) and the façade, built by Francesco Smeraldi partly following a previous project by Andrea Palladio. In the first half of the 17th century, the medieval church was completely demolished and replaced by the current building, designed by Giangirolamo Grappiglia. The 17th-century renovation of the church space ended with the construction of the high altar by Baldassarre Longhena (1649) and with the cycle of frescoes and canvases in the presbytery depicting stories from the life of Lorenzo Giustiniani (1695).The most relevant remains of the medieval church are the chapel, built in Gothic form by bishop Marco Lando, next to which Baldassarre Longhena built the chapel dedicated to Francesco Vendramin in the second half of the 17th century. The pictorial and sculptural treasures of the church include works by Marco Basaiti, Paolo Veronese, Luca Giordano, Giovanni Maria Morlaiter, Padovanino, Pietro Malombra and Antonio Vassilacchi, Orazio Marinali, Michele Ungaro and Melchior Barthel.