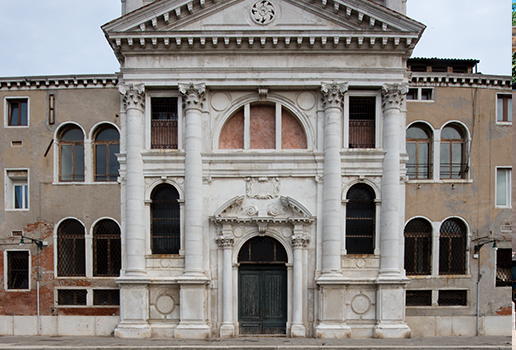 The church and hospital of San Lazzaro dei Mendicanti (now included in the complex of the Civil Hospital of Venice) are located in an area reclaimed at the end of the 16th century as part of the grandiose urban operation of the Fondamente Nove. The establishment of the hospital of the “Mendicants” is part of a long tradition of assistance to lepers, which the state inaugurated in the 13th century with the foundation of a leper colony in Dorsoduro, later transferred to the island of San Lazzaro.The church, designed by Vincenzo Scamozzi in 1601 and completed in 1631, is perfectly integrated into the two cloisters of the hospital, as can also be seen from the façade, built in 1673 by Giuseppe Sardi. A place of worship, but also of music, the church is isolated from the outside thanks to a vestibule where the funeral monuments to Alvise Mocenigo and Lorenzo Dolfin were erected in the 17th century.